You may come across suspicious scenes and bizarre murders along the way, but if you are prepared to take your chances, you will discover some hidden gems in Buckinghamshire. Midsomer on the Misbourne is a new self-guided locations trail highlighting Midsomer Murders filming locations in Buckinghamshire. Fans can follow in the footsteps of DCI Barnaby through the Chilterns, along the quintessentially English Misbourne Valley. 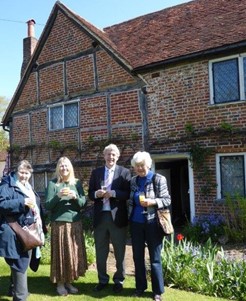 Midsomer Murders is a mass-market global attraction. More than six million people worldwide watch the show, and as a result, it attracts visitors from across the globe to filming locations year-round.
The Midsomer on the Misbourne locations trail illustrates the power of collaboration between volunteers in three Revitalisation groups pooling their local knowledge of what’s best in their areas and linking it to the wealth of Midsomer Murder information on websites such as www.midsomermurders.org. The new trail is unique in that it spans across five areas: Great Missenden, Little Missenden, Old Amersham, Chalfont St Giles and Chalfont St Peter. It covers 15 miles winding through beautiful countryside and picturesque Chiltern villages which have featured in at least twenty episodes. 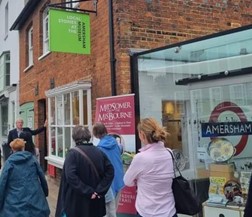 Initially conceived for the international tourism market in 2020, the pandemic imposed a pause, and the team decided to launch it for the local and staycation market this year. The team organised four launches to showcase each of the unique museums in the area: We started with Milton’s Cottage in April, then Amersham Museum in May, Chiltern Open Air Museum in June and finished with the Roald Dahl Museum and Story Centre, Great Missenden in July. Each launch included a short tour of Midsomer filming locations and other attractions of the area. Visitors stumbled upon an amateur artist murdered at her easel. The body had disappeared but her painting, smeared as she collapsed, was evidence of the struggle. The episode, Painted in Blood (2003), was filmed in Great Missenden. It turns out the aged artist was in fact a young detective constable staking out the house of a suspect. Tom Barnaby was taken off the case and replaced by an incompetent team from National Intelligence; very fishy! 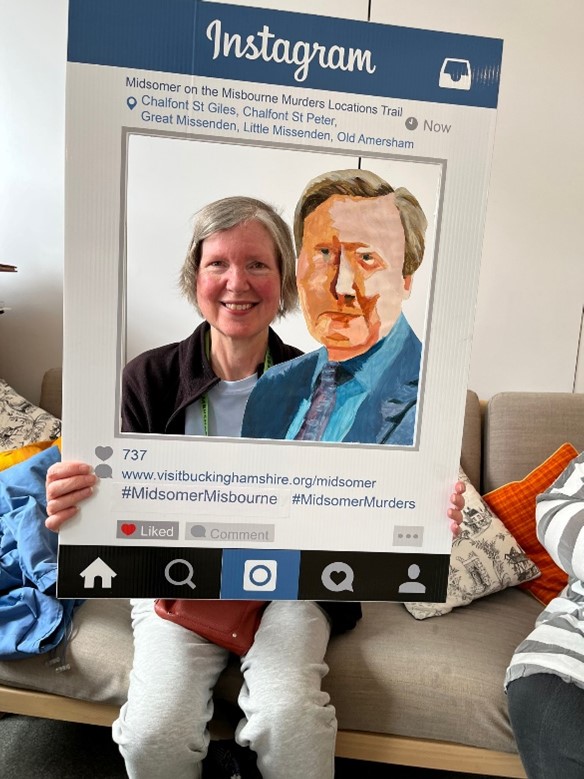