How to upcycle furniture with Coat Paint

When a house is as beautiful as Cliveden, it is only right that it has been at the centre of so many moments in history. Distinguished royal guests have included every British monarch from George I to Queen Elizabeth II.

Cliveden was home to Frederick, Prince of Wales in the 18th century and continued to be at the heart of British power politics, when on Queen Victoria’s accession to the Throne in 1837, the Duchess of Sutherland, the then chatelaine of Cliveden, was appointed ‘Mistress of the Robes’ she become a renowned political hostess and close friend and confident of the Queen. Like the Duchess of Sutherland, society hostess Lady Nancy Astor the first woman to sit in Parliament also drew members of the Royal Family to Cliveden, including King George V and Queen Mary, and George VI and Queen Elizabeth together with their two daughters Princesses Elizabeth and Princess Margaret.

In 2022, Her Majesty The Queen will become the first British Monarch to celebrate a Platinum Jubilee, marking 70 years of remarkable service to the United Kingdom and the Commonwealth, having acceded to the throne on 6th February 1952 when Her Majesty was just 25 years old. To mark this historic milestone, Cliveden’s Executive Chef Christopher Hannon, has curated an exquisite Platinum Jubilee Afternoon Tea menu to celebrate the occasion, which will be available throughout the year. Consisting of royal favourites and nods to traditional dishes from England, Scotland, Wales and Ireland, including classic mouth-watering pastries and sandwiches.

Alongside the Platinum Jubilee Afternoon Tea, Cliveden are thrilled to reintroduce the fabulous Astor Tea Service. Based on an original ribbon design, commissioned especially for Lady Astor; this fine bone china tea service has been crafted by William Edwards of Stoke-on-Trent and represents the finest quality workmanship. 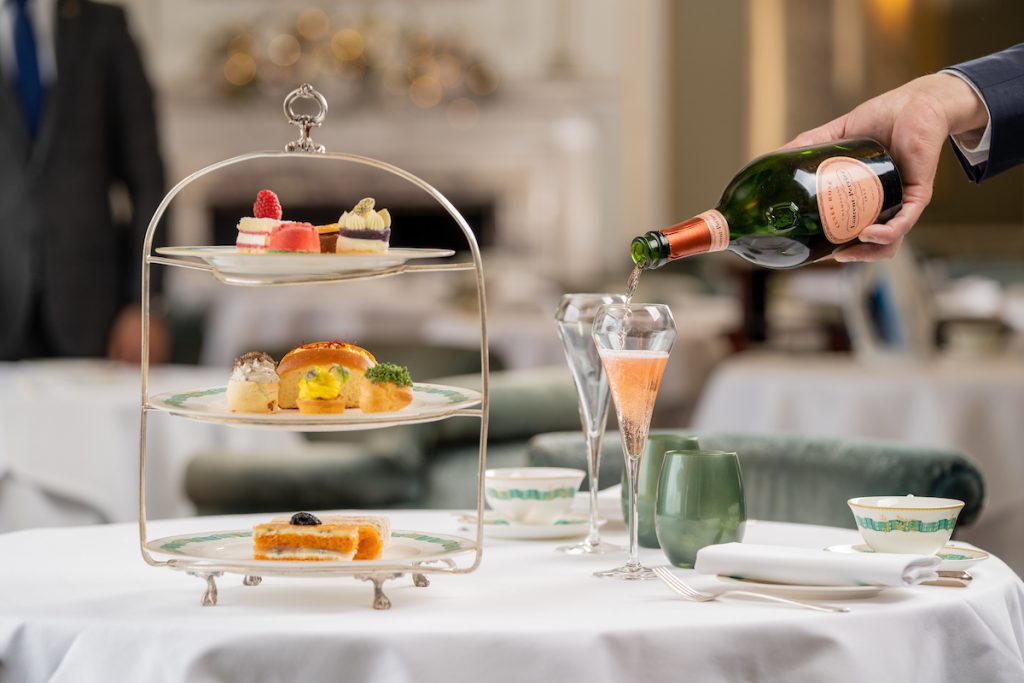 Platinum Jubilee Afternoon Tea – £45
Indulge in a perfectly prepared selection of traditional British savoury treats including delicious finger sandwiches and tempting modern touches alongside freshly baked scones with clotted cream and homemade strawberry jam, and delectable bite-size pastries and delicacies, including Queen Elizabeth’s favourite chocolate biscuit cake to celebrate Her Majesty The Queen’s seventy years of service, Victoria sponge with strawberry jam and cream (Queen Victoria would frequent Cliveden for tea at Spring Cottage), coronation sandwich (a nod to the Queen’s Coronation in 1953) and more. The Afternoon Tea is served with a selection of full-bodied and aromatic Cliveden tea blends.

Vegan Platinum Jubilee Afternoon Tea – £45
A further sumptuous menu consisting of sandwich choices: open roasted pepper sandwich; beetroot, horseradish and rocket; with a savoury Coronation kohlrabi soft roll and coriander. Dancing between the savoury and sweet divide is a delicious leek tart with whipped saffron cream with abundant sweet choices such as: The Red Rose, a rose and lemon mousse with verbena shortbread. Elizabeth’s chocolate biscuit cake has been cleverly adapted for vegans, as has the Victoria Sponge, which sports strawberry jam and coconut cream.

Book your tea here, you can thank us later!

Must-read tips for boosting concentration, energy and immunity in self-isolation